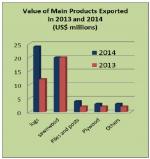 In 2014, dressed and undressed sawnwood exports contributed 38% to total earning, the second highest contributor after log exports. Value added products accounted for just over 9% of total exports the most noteworthy being plywood and shingle exports.

Another successful product in the export market was piling ( greenheart) which accounted for 6% of all wood product exports, almost the same as in 2013.

Other products which did well in export markets were wallaba poles and posts as well as craft items. Charcoal and other fuel wood exports, along with non-timber forest products, accounted for a very small part exports in 2014.